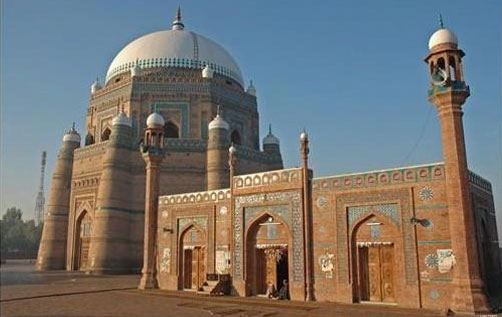 Multan is Pakistan’s third largest city by area and it is fifth largest by population. The city is located on the banks of the Chenab River in the geographic center of the country. Multan is known as the City of Sufis because of the large number of shrines and Sufi saints from the city. The city is blanketed with bazaars, mosques, shrines and ornate tombs. It is the birthplace of Fariduddin Ganjshakar popularly known as Baba Farid, recognized as the first major poet of the Punjabi language.

Multan is located in a bend created by five rivers of central Pakistan. The Sutlej River separates it from Bahawalpur and the Chenab River from Muzaffar Garh. The city has grown to become an influential political and economical center for the country, with a dry port and excellent transport links.

The culture of Multan has some prominent elements that form its identity. Those elements include:

Multani is one of the oldest dialects spoken in southern Punjab. It is a dialect of Punjabi and is a mixture of Jhangochi of Punjabi and Sindhi. Saraiki is the new name but for centuries, Multani was in use. it is mainly spoken in Multan District, Muzaffargarh District and adjacent areas This entire area has almost the same traditions, customs and culture

The area around the city is a flat plain and is ideal for agriculture, with many citrus and mango farms. There are many canals that cut across the Multan District, providing water from nearby farms. This makes the land very fertile.

Multan produces one of the best mangoes in the world. There are many varieties of mangoes being produced and mango farms are undoubtedly the most common sight in the suburbs of Multan. The hot weather and abundant well irrigated fertile land assures unprecedented taste for these mangoes. Chaunsa, Langra, Anwar ratol, Dusairi, Fajri, Desi and Sindhri are some of the many mango varieties currently being cultivated in Multan. The mangoes produced here are probably the sweetest on the globe and a large portion of the cultivation is exported to many different countries including America, England, Canada, Saudia Arabia and Japan.

Sohan Halwa is another specialty of Multan and is popular throughout the country.

It is famous for the cultivation of wheat, cotton, rice and sugar cane as well as other fruits apart from mangoes such as citrus, guavas and pomegranates.

Multan is famous for its multani dresses, mainly for women. The dresses are made with beautiful embroidery and have a very ethnic touch to them. The dress for men includes shalwar kamiz and lungi. Another element in its dress code includes the Multani Khussas: shoes that are the latest trends in streets of Pakistan. Nowadays, these khussas are in fashion and are demanded by women all over Pakistan. This demand has risen the price of this product and has made it slightly expensive than other regular khussas available in the market.

The Fort site now looks as a part of the city because instead of the river it is now separated by a road which looks more like a bazar and remains crowded throughout the day. Nobody knows when Multan Fort came into being but it was there and it was admired and desired by kings and emperors throughout centuries’. It was considered as one of the best forts of the sub-continent from the defense as well as architectural points of view.