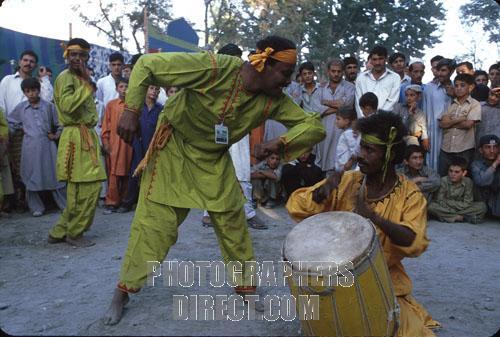 It is believed that they belong to East Africa and came to this part of world between 1200 AD and 1900 AD. The first person of this tribe came to India in 628 AD and several others came in 712 AD when Islam came in the subcontinent. Historians says this tribe have been soldier with Muhammad bin Qasim’s army and were known as Zanjis. Their arrival to this part of world as increased in 17th century when Portuguese sold them to local princes. They are divided into four tribes Kharadar Makan, Hyderabad Makan, Lassi Makan and Melaro Makan. They follow Pir Mangho as their saint.

Their language is Makrani, Makrani is languages that is mixture of Balochi and Sindhi and have most of its dialogues are similar to Urdu and some of the phases are very similar to African language.

Most of the Makranies belongs to Islam and follow the Barelvi School of though. Pir Mangho is followed as the saint of Makranies and they also have an annual festival know as Sheedi Mela, in this festival they visit Mangho Pir and play music and dance.

Makranies mostly have intermarried with the people of their own tribe; they marry mostly with the fisher people, labours dyeing and cloth Makers. On their marriage they organise special functions in which the sing, dance and celebrate the event many days before the actual marriage ceremony.

Music is a major component of Makrani culture. In 1970 and 1990 Lyari produced its own music knows as “Lyari Disco”. The musical beats, song and dances are similar to Africa. Music is not just use for entertainment but it also comes in their faith. In 1980 Dimly-lit a small recording studio was established in Lyari where young men and women recorded music. The song “Bija Teer Bija” recorded in Lyari Disco was used in PPP electoral campaign during 1988. Younis Jani is a popluar singer of modern word who belongs to Makran and his songs are very famous now days.

Football is the one of the most famous sport among them especially in Layri and Pakistan Football team have players from Layri. Layri is also known as mini Brazil because they love Brazil football team like their own team.  After football boxing is the next most famous sport and Layri have produced many international boxers, these boxes also won Gold Medal in Olympic. The Donkey Race is also a famous sport, it start from Layri and ends at Galifton Karachi.

The Makrani region that comes under Balochistan is mountainous; there are three main ranges, the Makran Coast Range, the Centeak Makran Range and Siahan Range. The weather is too in this area; Turbat is dry and moderate in winter but hot in summer on the other hand Panjgur region is cold in winter and moderate hot in summer. Much of the region is mountainous. There are no rivers so agriculture relies on springs rains and underground watercourses. The Makrani that lives in lower Sindh face a bit different scenario the climate is neither too hot nor to cold.

Makranies that lives in lower Sindh are mostly doing the fishing business. They have the largest labour force employed at the Karachi port and harbour. Lyari is the only area in Karachi that hardly gained any benefit from the industrial and economic growth that took place between 1950 and 1980.  As there are no river so there are no crops but Dates, coconuts, bananas, grains and pulses are important crops. The development of the new port at Gwadar is currently driving the local economy.

The thing that is common in Makran and African culture that they still respect crocodiles and worship them. They keep crocodiles and feed them on the regular basis. Historian says the area was known as “Crocola” that means worship of crocodiles.

This area of the Pakistan has produced many heroes for this land. Hoshu Sheedi was an army leader of Talpur Army and fought with British army and died in the defence of his land. Noon Meem Danish is a famous Urdu language poet that belongs to this part of the word. As boxing is famous sport and many Olympians boxers belongs to this area such as Mehrullah Lassi and Abdul Rasheed Baloch.  Ali Nawaz Baloch is a big name in the football history of Pakistan.

In 18th century this part fell under the Khans of Kalat control. In 19th century British had very little control over it. Since 1970 to 2008 elections Lyari has been an unbending state for Pakistan People Part (PPP). Z.A Bhutto’s manifesto has won the hearts of these people and from that manifesto they became loyal to PPP and after the hanged death of Z.A Bhutto they recorded lot of protests against Zia regime. Many of the Lyari people were jailed due to their support to Murtaza Bhutto. They also welcomed Benazir Bhutto with a large really on her return to Pakistan in 1986. Asif Ali Zardari and Benazir Bhutto marriage also took place in Lyari. Now many other political parties have opened their offices but still PPP is the strong party, so Layari has a major contribution in the politics of Pakistan.

This area is also known for its streets crime. Every day some target killing and other incidents takes place. Mostly these activities are back up by political parties. The story began in 1960 when first time a gangster Kala Nag came in this area and started business of hashish and snatching. He gave birth to the other gangster groups later with the arrival of weapons they became more dangerous and political parties start using these groups for their personal motives.