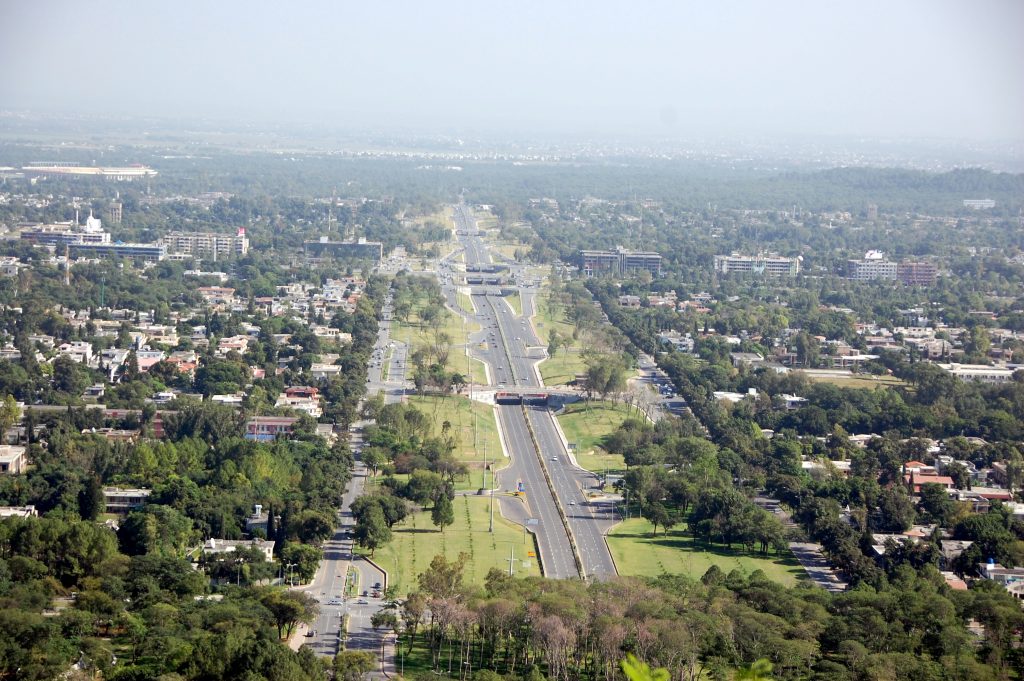 Islamabad is believed to be a piece of Art. While traveling to the City from the airport one can see the smooth transition from dirt, traffic and general unrest to greenery, the beautiful Hills and Majestic Faisal Mosque which catches your attention in a split second. The construction of the Islamabad  began in 1960, but in about a decade the city had developed and emerged as one of the new national Capitals of the 20th century. Today the city has to boast a number of playgrounds, green belts, gardens, fountains, avenues, shopping centers, radio and TV headquarters, numerous newspapers, mulch-storied commercial and government buildings, a vast hospital complex, parliament building, Presidential palace, Prime Minister’s Secretariat and his majestic residence, a sports complex, a zoo of sorts, and a vast city park .

The City was planned to perfection. The designer ensured that every sector had a public school, a mosque and some community centers. The class based division was not in the plan therefore all the large houses were connected to the smaller ones. The city turned out to be something completely different. A embodiment of the “elitist” society, the exploitation of our masses and the attitude of the  people generally known to flaunt their superiority by claiming to be on top of the social class hierarchy. The twist in the plan of the city is very evident from how the entire map has been altered to the specifications of the Elite. The city discriminatory factor exists even in the most minute details, take the sectors for example. The design of the city caters to the economic standing of various classes and it keeps people from different financial prowess far away from each other.

Given the structure of the City, the mentality of the people is no different. Big business ti-cons, the politicians, feudal lords and the nouveau riche have all found it beneficial to have mansions in this part of the country to showcase their power and money.The ‘money culture’ is prevailing where everyone is in the line to make the most extravagant house or buy the most expensive car. The standard of living is set by the elite and the others are just blind followers. The general price level is known to be higher in Islamabad due to the “no bargaining” by the rich. The demand of everything is high, people are ready to pay whatever it takes to maintain their image. Likewise, the constant need to impress the other with help of showering money also persists. One is constantly under pressure by the actions of the “competitor”.

This class is more prone to corruption given their constant desire to be better than the rest. There are cases of hypocrisy in terms of philanthropic motives. The auctions, the talks and the fundraising has also revolutionized. It not only about giving back to the society but has become a matter of self actualization. The wars of “who arranges the best fundraiser” prevails. The amount of money and time spent to prove to the society that one person can throw money around better than the other exists in Islamabad also just like any other class conscious society.

The term psychological barbie dolls fits the people living here perfectly. The culture having no limits on the credit cards is very commonly found. While, the men are busy managing the numerous businesses/investments/foul practices, the women indulge themselves in shopping sprees and throwing money around in cafes and restaurants. The children on the other hand are sent to privates school that are also ranked based on how much the parents are ready to pay. Sheikh zaed and Islamabad American being on top followed by Frobels and headstart moving down to The city school and Beaconhouse. The children also wear their ego on their arms roaming around like they own the place. Mostly neglected by their families, they find refuge in the company of similar boys and girls. Throwing parties, driving their parents’ cars, smoking, drinking is all covered under the realms of the

social status and are thought of being necessary to maintain their social standing.

The blame is not only on the people living in the city. The design seemed faulty from the beginning. The structure to only cater for the elite is prominent in its most important aspects. It is hard to find the boundary between with high and the low income residential areas, Islamabad is probably easily misunderstood as equal while it has been designed keeping in mind the grade structure. The Government workers are provided accommodation far away from their work place with no public transport system. The parks were strategically placed alongside the bureaucratic elite sectors while the other sectors were clearly neglected. In a city where the public graveyard has allotted areas (true for many graveyards in Pakistan as well), the distinction between classes is extremely visible and the nature of the city’s social atmosphere is abhorrent to anybody who seeks the promotion of social welfare. The very shape of the villages that are located within the 2km diameter from the downtown of Islamabad is a clear symbol of the City atmosphere and the way the elitist nature that has forced the welfare of the members of that particular class over the welfare of the poor in the City and throughout Pakistan.

The discrimination based of income classes leaves one speechless. The circulation of money and investment that has been accumulated only to favor the elite is the cause of the problem. by not building pointless hotel-residential-office complexes and actually trying to provide low-cost housing to the lower class who have been abandoned in shanty homes in the outskirts of the city can actually help in creating a better and equitable capital. By working on the public transport and increasing check and balance on the automobile sprawl can also be helpful. By increasing developmental projects in other sectors and not only focusing on the F and E sectors the standard of living can increase all together. By fixing these structural faults one can expect to use divide and rule to burst this elitist bubble.