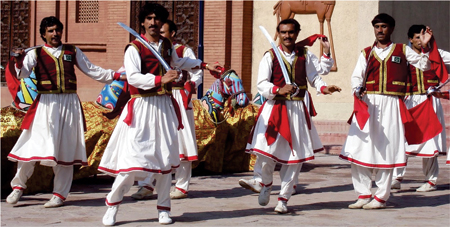 The tribe Brahvi lives majorly in Baluchistan. Some of the Brahvi’s live in Sindh, Afghanistan and Iran. During the seventeenth century, the Brahvi became famous in Kalat, Baluchistan. For the next 300 years there was an unbroken line of Brahvi rulers. The British eventually acquired control over the strategically located Kalat, The state Kalat remained independent even after the acquisition by the British. Later on, in 1948 it was incorporated into Pakistan.

Brahvi are concentrated in Baluchistan province around Kalat. Brahvi-speakers are also found in southern Afghanistan, Iran and the province Sindh. The region of Kalat is arid with very less rainfall. The temperature is scorching in summer and cold in winter. Brahvi are known for their hospitality. They consider their guests as a blessing and they serve them with great meals. They slaughter animals to prepare special meals for their guests. The guest is considered to be the guest of the whole village

The language that they speak is Brahvi. It is one of the oldest languages of the sub-continent and is spoken in Afghanistan, Iran, Baluchistan and Sindh. Brahvi living in Sindh know both Brahvi and Sindhi. Brahvi living in Baluchistan know both Brahvi and Baluchi. There is no Brahvi script. Brahvi is a Dravidian language and, as such, is different from the languages of Pathaan, Baluch, and Sindh.

The religion of Brahvi is Islam (mainly Sunni) and they celebrate all the Islamic rituals. They believe in Saints and often visit their shrines.

The Brahvis are organized in tribes and each tribe has a Sardar (Chief). Families are usually extended but the ones who have moved to urban areas do form nuclear families.

The following sub tribes exits in amongst the brahvi speaking people:

Brahvi do not go to formal courts. They have their own judicial system known as Jirga (Panchaed). It mainly has five members known as Panchh. The Sardar of the tribe gives the decision.

Literacy rate in Brahvi is very low. Some of them still believe that formal education is of no use especially for girls. Therefore, only a niche avails formal education.

Most of the Brahvi rely on agriculture. They are mainly landlords and do farming. Some of the modern Brahvis, who get formal education, work majorly for the government.

Brahvi and Baloch enjoy the same kind of food. Sajji is a very famous dish among Brahvis. Leg piece of a goat or a sheep is cooked on fire which is known as Sajji. Mutton is an important component of the Brahvi diet.

Marriages are usually arranged within the close family. Divorce rate is very low because of this. The weddings are typical Muslim-weddings with slight variation in the customs that are practiced. In most of the cases, parents do not ask their children about their will and arrange the marriage by themselves. Girls get married at a very early age. Mostly the marriages are arranged when the children are born.

The women are not allowed to come in front of their fiancés before marriage. Brides have to sit in a corner (Kund) and are not allowed to come out of that room or meet people other than their immediate family at least a week before their marriage. Groom has to pay an amount (lab) to the bride’s family for the expenses that they have to bear during the wedding. This is not practiced that often nowadays. The groom bears all the expenses of the wedding. There is no concept of dowry in Brahvi culture. When the groom is given a bath and wears the special Boski (cream colored Shalwar Kameez) dress and Turban, he is not allowed to put his feet on the floor. Cousins lift him on their shoulders and take him were he has to go. Before Nikah, the groom is taken for Sargas in which he is taken in a car for a round. After Sargas, when the groom sits on the Saej, he is served with Shurdi (a special sweet) and is asked for money.

Birth of a male child is taken as a source of pride and is often celebrated in Brahvi culture. It has great importance for a Brahvi and they celebrate it by firing gunshots in the air. They slaughter goats to celebrate the son’s birth.

A male child may undergo circumcision (Sunnat) within six months. This is properly celebrated and the cost associated with the celebrations cause many to postpone it until as late as the age of ten.

If someone dies, the news is conveyed to all the relatives so that they can come for the funeral. Meals are arranged on third day after death, and every Thursdays till the 40th (Chaliyo) day after death.

Rules are decided by the Jirga and are enforced by them. Following are some of the rules that are commonly practiced:

Daughters are not given any share in the father’s property. For that matter, some of the Brahvi’s practiced the concept of Satti in which they used to marry their daughters with Quran. This is hardly practiced now.