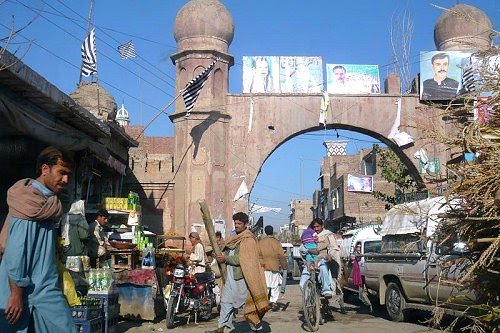 Bannu (Bana) is located in the KPK province, approximately 120 kilometers South-West of Kohat City and 140 kilometers North of Dera Ismail Khan City. Bannu District covers an area of approximately 1227 sq.km. and has a population of nearly 7 Lakh people, most of whom are Pakhtoons (Pashteen) although there is a very small population of Hindus, Sikhs and Christians present there. Pashto (Pashtay) is the main language spoken in the city and villages with a tiny mix of the Hindco, Marwati, and Waziri dialects in some places like the main city bazar (Bazore). The Kurram River (Koorma) flows through Bannu providing a rich source for the agricultural area.

Bannu was formerly a British Army stronghold. The British built a wall around the city with several gates in every direction and a giant fort in the Cantonment area named Dilip Singh Fort. The city gates are called Lakki Gate, Parady Gate, Qasbaan Gate, Mandaan Gate, Sokari Gate, Hinjaal Gate, Miryan Gate and Railway Gate, much like the wall and gates of Lahore. There are several famous markets and business centers in the inner Bannu city, which include Chowk Bazar, Tanchi Bazar (famous for a huge water tank high above the surrounding buildings), Chai Bazar (famous for variety of tea), Railway Bazar, Jaman Road Bazar (famous for countless Jaman trees alongside the road), Tehsil Bazar (famous for gold merchants), Mir Saudad Market and Gardanali Gali (famous for ladies items), Tail Mandi (famous for all kinds of oil), Sabzi Mandi, Gurh Mandi (famous for the best Gurh in the region), Ghalla Mandi, Maal Mandi.

Chowk Bazar is the most famous market in the entire region. Every day, after Asar prayer (Mozdigar) the people gather and celebrate festivities, dancing to the traditional dhol rhythm and eating and sharing sweetries. Some say that Eid is celebrated every day at Chowk Bazar.

A majority of the people of Bannu (Banisai or Banisee) live in the villages surrounding the city. There is a strong tribe system prevalent in the region. The major tribes are Banisee, Niazi, Wazirs, Marwats , Abbasies, Bhittaan, Syeds and Awan with many more sub-tribal groups and factions within each larger tribe.

The men of Bannu wear Kameez Shalway (Khat Pardeeg) usually with a Waistcoat and a Shawl (Parkai) and the traditional Bannu sandals (Supleeyay)(much like the national dress of Pakistan). They also prefer the Charsadda/Kohati chappal and many of them wear a cap of some sort all the time. Most men either grow beards or only a mustache with rarely anyone clean shaven. Also, the men like to put on rings with some stones preferably Yaqoot. Formal dressing is similar but without the Shawl and with Charsadda/Kohati chappal and usually a Blazer in the winters. The women-folk wear colourful clothes at home but go outside only in a full Burqa (also known as a shuttlecock burqa). Bannu Woolen Mills is famous all over Pakistan for producing the great quality fabrics.

Eid (Akhtaar) is the biggest festival celebrated in Bannu. It brings the people together in a way that is unparalleled anywhere else in Pakistan. On the eve of Eid, the all the men gather in the village centers (Chaaok) around huge bonfires and dance and celebrate with music and fireworks and aerial firing while the women gather in the houses with their own bonfires. On Eid-ul-FItr, every household cooks rice, either plain white with ‘Desi Ghee’ (Sheecha Ghwaree) or the Palao.

The men-folk assemble in the village centers before the Eid congregational prayer, and then proceed to every house in the village and eat a bit of rice and then proceed to the next house. Once the men are done and gone to the village Masjid for the prayer, the women-folk carry out the same exercise throughout the village. The same practice is carried out in Bannu City as well but to a limited extent. At Eid-ul Adha, after the Eid congregation, all the men-folk gather and help each other slaughter the sacrificial animals together. Family and friends visit each other on both occasions and a there is a great display of hospitality as a whole.

Marriages are celebrated in a very elaborative fashion in Bannu. The female relatives of the groom may start the jubilations, with traditional Tappa style songs (Tapay) as early as a month prior to the actual date of the wedding and they celebrate their own private Mehndi event in the house amongst themselves. Dowry/Barri is usually not given in great quantity and is given to the couple by both the families. On the day of the wedding, the all the men in the village gather in one spot and help with the catering and tents arrangements, some even bring with them the cooking ingredients as gifts for the wedding, while the women gather in the house of the wedding ceremony and help with the preparations there. There isn’t usually any elaborate engagement ceremony prior to the wedding day which is why the rings are usually only exchanged on the wedding day. The groom’s party or Barat goes to the bride’s village and take bundles of sweets (Khozhu) along. The bride’s family arranges a tea party for the Barat. At the time of the departure, the bride tosses some wheat and water behind her over her head as a symbol of leaving her parents’ house forever. She is then brought to the groom’s house, in the midst of fireworks and aerial gunfire, where the elaborate Nikah ceremony takes place. The Walima ceremony takes place on the very next day usually during lunch time, however the bride’s family would bring over the food for the bride as she wouldn’t yet eat anything in the groom’s house. After the Walima is over, the bride is taken back to her parent’s house usually for three days, after which she is brought back to the groom’s house with similar jubilation. The groom would take his friends and the youngsters in the village to the famous Chowk Bazar and celebrate the tradition of Zhureen, which literally means the youthful, by dancing and sharing sweets etc. Several days after that, the bride will cook her first dish in the groom’s house, she will attempt to clean the house and do other small chores as a symbolic act of starting a normal life in her new home. There is also plenty of joyousness when a child is born in the house. Boiled ‘Channa and Gundoom’ is  distributed in the entire village and everybody comes around to wish a child a happy and prosperous life.

Another important time of celebration is the harvest season. The men gather in the fields and reap the crops as a team. Everybody helps each other in the spirit of brotherhood. The traditional Bannusai Dhol (Banisai Dayl) is played to keep the people motivated and entertained as they work hard all day and night. After the main event of harvest in finished, the people give each other gifts in the form of the recently harvested produce.

The traditional music of Bannu is the Dhol (Banisai Dayl) and Rabaab (Raboab). The men usually dance the ‘Draab’ to the beat of the dhol in large circles in unison. It starts slowly with a few steps and a slow pace and later the pace is increased along with the number of steps in each round resulting in the Attan style dance. Shehnai is also part of the traditional music.

The people of Bannu are big fans of two specific dishes: the Painda and the Palao (Peelow). Painda is usually made at weddings and is considered a very respectable meal. It is made by cooking meat in lots of gravy which is poured into a large dish with mashed bite-sized pieces of chapatti (Nughaan). Several people may eat from the single dish which also promotes a sense of unity and brotherhood among the people. Painda may also be cooked youngsters in a sort of a picnic (Saybaat). The interesting thing about Palao is that it is sold in the city fully cooked and ready to eat much like the Savour Foods Palao found in Rawalpindi and Islamabad. However, the Palao, most famous of which is in the Laki Gate market, is sold by weight on carts. Halwa (Wrayshaa) is also favored a lot in Bannu.

There is a gun culture prevalent in Bannu. Many people carry gun openly while a lot of them are locked and loaded. This is because of the disputed between people and sometimes tribes. The Pathans are people of great passion and emotion and place their pride even before their own lives which is why many disputes are created and carried forward with the help of guns. The most favored gun in Bannu is the AK-47 Sub-Machine Gun. Many men would be seen carrying the AK-47 often with interesting modifications like circular 100-round magazines, scopes, retractable butts etc. This has also sparked a black market of guns in the region. Most of the black market guns and munitions come from the nearby area of Darra Adamkhel. A 9mm handgun can be purchased in Bannu for as low as Rs. 10 thousand while a locally made copy of the AK-47 is as cheap as Rs. 50 thousand.

However there is also a very powerful legal system in place in Bannu and the surrounding region. It is the Jirgah system which has the power to end disputes and enforce the terms of the resolution on both parties. The Jirgah system has several levels. The most basic level is at the village level, there the village elders (Mushaeron) deliberate and decide upon the solutions. If one party does not agree with the proposed solution, they have to pay a set amount of fine before they can appeal to the higher level of Jirgah. The next level of Jirgah is at the region level and then the district level and all the way up to the Loyah Jirgah that usually tends to Matters of National Security or Tribal Warfare.