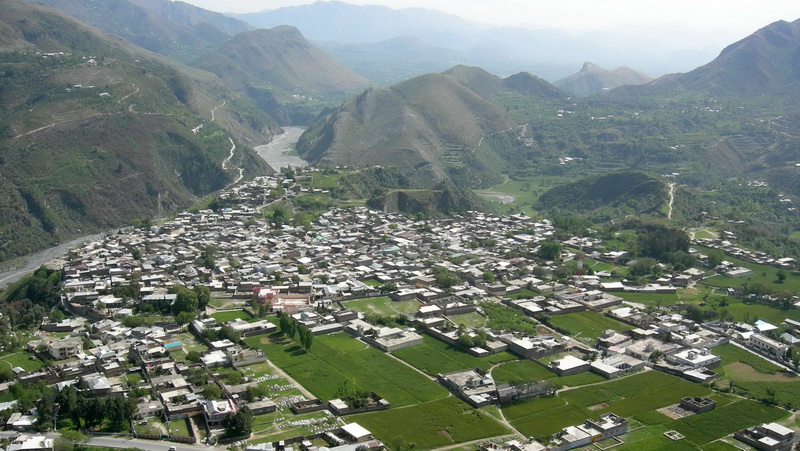 Abbottabad, the city of pines, is located in the Hazara region of the Khyber Pakhtunkhwa province, in Pakistan. Abbottabad is also known as the City of Pines, as you can see a lot of pine trees everywhere in this city.

Abbottabad is located in the Orash Valley, 50 km northeast of the capital of Pakistan, Islamabad. Abbottabad is the capital of the Abbottabad District. The city is blessed to have a pleasant weather all year round. Further it is known among the country because of its good educational institutions and military establishments, as the renowned military academy, Pakistan Military Academy (PMA) is located at Kakul near Abbottabad. Further, the city is also famous for its Abbottabad Public School (APS), Burn Hall School and many Medical colleges like Ayub Medical College

Under the British Raj, Abbottabad was the headquarters of the Hazara District. Abbottabad got its name from the founder of the town, Major James Abbott. He founded the town in January 1853 after the invasion of Punjab. From 1849 to April 1853, Major Abbott was the first Deputy Commissioner of the Hazara district. It is an interesting fact that Major Abbott also wrote a poem titled “Abbottabad” in which he wrote how much he liked the city and was gloomy when leaving it. Abbottabad became an important military cantonment, in the early 20th century.

The people of Abbottabad are known to be peaceful and educated .Unfortunately Abbottabad was ill famed in 2011, when Osama bin Laden was found and killed by American forces in the shadows of night. It should not be said that there are no friendly and hospitable people in Abbottabad, hardly anyone knew about the fact that Osama bin Laden lived in the city.One of the reasons why Osama stayed in the city could be the peaceful environment of the city.

There is a town in Abbottabad District known by the name of Nawanshehr. The oldest and largest mosque of Abbottabad, Ilysai Masjid is found to be there. Since the weather of Abbottabad is pleasant, many people from other parts of the country come to visit this historic mosque.

The major language spoken in the Abbottabad district is Hindko (94.26% of the total population).Hindko sounds like Punjabi. Other languages spoken are Urdu, Pushto and Punjabi.

Abbottabad is a well- cultured area, with a combination of modern and ancient cultures. The religious bonds are very tight and majority of the people are fond of Islamic traditions and they follow the path of Allah. The customs of the city include Hujra meetings (sitting), the Islamic traditions are quite prominent in rural areas and they have high moral values in the society.

The common dress of the people is Shalwar Qamiz, but the Government officials and students mostly wear coats and trousers. The traditional Turban, Kraquli, Patti caps are also worn by people. Wearing waistcoats and coats over Shalwar Qamiz is also a trend. For the women, they wear the national dress, Shalwar Qamiz, Dupatta and Chaddar.

Abbottabad is becoming a modern city as the women will find Bareeze, Stylo and many other stores in the city.
Cuisine

The people of Abbottabad are fond of maize, wheat and rice. In Rural areas, Desi Ghee and Lassi are mostly consumed.

People of Abbottabad are fond of eating out since it is the only major source of entertainment for them. There are many famous restaurants in Abbottabad including Red Onion, Kaghan Café, which serves a variety of Pakistani cuisine, Chinese, Bar-B-Q, beverages and many more. The Chicken Karahi, Chicken Korma, Sajji are very much popular. The fast food chains like KFC are also present in Abbottabad.

Further the town in Abbottabad, Nawanshehr has an old bazaar which is famous for its Chapli Kebab.

Tourism is one of the main sources of income in the mountainous areas. Like many other areas of the north, Abbottabad also benefits from foreign and domestic tourism. When summer arrives, a large number of tourists travel to Abbottabad. The popular tourist places in or close to Abbottabad are Ayubia national Park,Bara gali, Shimla Hill, Dor River Valley (at Harnoi). Khaira gali,Thandiani and Nathia Gali.

Other than tourism,many people have settled in Abbottabad for educational purposes. Further Abbottabad saw an influx of migrants from Azad Kashmir after the 2005 earthquake. People have also moved from Swat District and Waziristan when operations were held against the militants.

So summing it all up, Abbottabad is a beautiful place. The people of Abbottabad are known to be peaceful and educated. Many tourists come and visit this city. Abbottabad acts like a gateway, which leads to many other beautiful places in the Northern areas. These include citites like Nathia Gali, Thandiani and Bara Gali.  Other than tourism, many people have come to settle in Abbottabad for educatyional puposes. There are schools like BurnHall School. Ayub Medical College and for those who are interested in joing the army, Pakistan Military Academy (PMA) .Hindko is mostly spoken in Abbottabad. It sounds like Punjabi but the words are different than Punjabi.The customs of the city also includes Hujra meetings (sittings). The national dress worn by people is Shalwar Qamiz. Women wear Shalwar Qamiz with Chaddar and Duppatta.People of Abbottabad are fond of eating out and there are many places to eat at like Red Onion, Kaghan Café, KFC if the kids like. Further, people can also try the Chapli Kebabs at NawanSheher.

Unfortunately Abbottabad was ill famed in 2011, when Osama bin Laden was found and killed by American forces in the shadows of night. It should not be said that there are no friendly and hospitable people in Abbottabad, hardly anyone knew about the fact that Osama bin Laden lived in the city.One of the reasons why Osama stayed in the city could be the peaceful environment of the city.