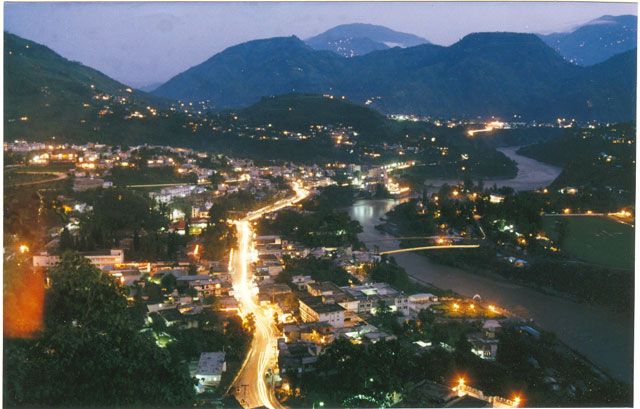 Muzaffarabad is the capital of Azad Jammu and Kashmir, comprising of hilly area, located at the bank of Neelum and Jhelum rivers. It offers breathtaking views of the Tarai Mountains the foothills of Himalaya and also has the 5 star hotel pearl continental. Striking scenic beauty and pollution free atmosphere occupies every part of the city. However, the roads are not yet well-constructed. The name “Muzaffarabad” comes from the name of Sultan Muzaffar Khan, a former ruler of the Bomba Dynasty.

It was going towards development to a large extent however; the 8th October 2005’s (earthquake) tragedy destroyed almost 50% of the city hence, leading it backwards in terms of development.

The culture of Muzaffarabad has many similarities to that of northern Punjabi’s culture. It has always been one of the important cities of Kashmir showcasing conflate of various cultures and languages.

People of Muzaffarabad are full of talent and are generally considered as friendly and cultured. The culture also enjoys diversity because people from other areas also transfer here in their jobs or for other purposes. However, different practices are followed here.

Kashmiri is the prominent language of this city. Other than Kashmiri people also speak urdu, Shina, Balti, Potohari and Pahari there.

Muzaffarabadians are famous for cooking a variety of food items. There is a trend of heavy intake of food which makes these people highly obese.

Both men and women wear very traditional dresses like Shalwar Kameez; however, the some women also wear Phairan (a traditional kashmiri dress) in addition to Shalwar kameez. The use of Kashmiri Shawls, to cover their heads, among women is very common in the city. Moreover, the use of Kashmiri embroidery on dresses is also very prominent practice noted among the people. Boys also wear pants and shirts.

The people of Muzaffarabad are very skilled and have expertise in a number of fields. There talent is popular all around the country and people visit Muzaffarabad to purchase these items from different cities of Pakistan.  There are various famous things from this area;

Muzaffarabad enjoys all four seasons but it is comparatively colder in summers and winters as compared to Islamabad.

Muzaffarabad being the capital of Azad Jammu and Kashmir has the beauty worth watching. Occupied in the middle of mountains, this attractive city could attract the tourists from different countries. But unfortunately its tourism is not yet well established and needs to be promoted.

Muzaffarabad is a beautiful city and is full of all kinds of necessities and skills which differentiate it from other cities of the country.