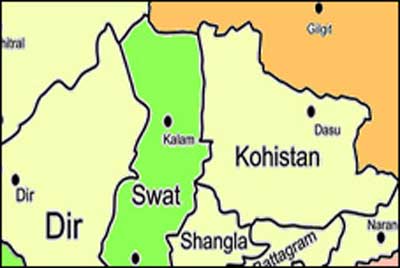 Kohistan, a Persian word meaning “land of mountains” is an administrative district in the province of Khyber –Pakhtunkhwa. It covers a total land area of 7,492 square kilometers with a population of 472,570 at the 1998 Census. Kohistan is where Karakorum, Hindukash and Himalayas meet making it one of the unique mountain ecosystems of the world. The district consists of four Tehsils:  Dassu, Pattan, Pallas and Kandia.

The beauty of the Kohistan district is unmatched with the name given of “paradise of earth”. The green pastures, forests, unique species and majestic mountains make it literally heaven. The silk route which connects India, China and Afghanistan is a centuries old route and there exists rock inscriptions of universal importance.

The ancestors of the Kohistan district came from Arabia at the time when spread of Islam was at its peak. They left Arabia to save themselves from the persecution for not accepting Islam

The Turks ruled the area of Kohistan since 1399 and this rule continued till 1703. After that the Swati’s attacked the area and the Thakot fort for which was put up by Shamsher khan Turk after much struggle was occupied by the Swati’s.

The Capital of Kohistan District is Dasu consisting of three tehsils Palas, Pattan and Dassu. The district is divided on the east and west cost of river Indus and the Kohistan of Indus Valley is also known as Abaseen Kohistan. The west part was called Swat Kohistan and the East part is called Hazara Kohistan. On the Swat side the tribes are divided into two groups, Manzar and money. Besides the Indus valley the other valleys of the district are Dassu, Khandia, Besham, Pattan, Sumar, Komila, Sazin, Talil valley, Kolai, Palas, Jalkot, Harban, Darel, Basha, Tangir, Shatial

The district is located over the mountains and hilly agricultural areas. The lower regions have extreme climates, with the weather getting extremely hot in the summers and extremely cold in the winters. The weather on the higher areas remains relatively mild and very pleasant in summers. Since it is mainly a hilly areas and the region consists of high mountains, there the higher areas remain closed due to heavy snowfall. There also remains a moist climate throughout year due to continuous monsoon rains and winds. The area due to these continuous rains remains lush green with green pastures, and many small glaciers are also found on the higher altitudes.

The population of Kohistan is over one million. The pushton community dominates the west of the district. The district is mainly the home of various Dardic people including the Khadiawal, Kayali, Shina, Kohistani, and Torwalis. The people of Kohistan largely depend on livestock being an agricultural district. People use buffaloes, cows, sheep, goats and bullocks. Also because of the constant invasion by Tibetans, Sikhs, and Hindus the people have developed a rebellious nature and even today the “Rebellious culture” is the most distinctive quality of the region.

The majority of the Muslims belong the Sunni sect with a large minority of the Shia sect also belonging to the area. There are a large number of Molvies in the region and only they are considered to be the heads of the regions. Apart from this there is also put a great emphasis on the religious education. And many of the renowned scholars of Hadiths, philosophy, Islamic jurisprudence and herbal medicine are from this region.

Due to the incoming of people from different surrounding areas like china and Tibet the superstitions are also very famous on this part of the region. Currently after Islam majority are the followers of Deobandi sect largely associated with the Raiwind Center.

The literacy rate of the people above the age of 10 years is 11.1% – male 17.23% and female 2.95%. and the literacy rate is amongst the lowest in Pakistan. The major and best schools in the area are developed by the Army, and the education into the region is slowly expanding over the time.

Kohistan is the second poorest district of Pakistan and the low standard of poverty prevailing in the region is visible through the faces of Kohistani women. The mortality rate is extremely low because of the poor health facilities and 10 percent of the children die before they reach their 5th birthday. Some heath care institutes have opened up after the 5th October earthquake, but still the chronic diseases and the death occurring because these are only increasing.

The district has an agricultural economy with livelihood depending on the livestock and related products. Agriculture, forest, hunting and herd rising are among the major attractions of people’s livelihood. The crops which used to be grown in abundance, but recently the production of Barley and paddy has been completely stopped. Honey bees are also reared and honey is then sold in the market. Besides this the cash money is also generated by selling of timber logging, herbs, fuel wood, walnuts, walnut bark (dindasa), honey, butter, wool, pulses, weapons and minerals. Wool, skin and butter produced by rearing cow goat, sheeps and buffaloes are also sold in the market to generate income. To earn the livelihood the males of the families also keep on migrating, looking for the work, therefore the region is also famous for its cultural migration.

The Kohistan district is an administrate state with proper Judiciary and revenue systems. There is representation of the district in the National assembly of Pakistan and the Provincial assembly via MNA and three MPAs. But due poverty and illiteracy the social injustice in the region is on the rise. People are murdered every now and then.

The district of Kohistan is one of the extremely beautiful regions of Pakistan with high mountain peaks, beautiful valley, the lakes, greenery, forests, pastures, unique animal and bird species. The place can attract a lot of tourists and build in the economy of Pakistan. The people of Kohistan have a natural tendency to work hard because of the hard loving conditions and the requirement to work hard to earn their livelihood. But the region is not being given importance as per its potential. The education is not given importance and hence the hard labor force is being neglected, the beautiful places are not been taken care. After the 2008 October earthquake there have been made no efforts to restore the place back to as it was and there is a loss to its beauty and there have been an increase to the diseases because of poor health facilities and more and more people are dying because of small chronicle diseases.

We need to recognize the importance of this region and the value this is for us, something which has not been done until now.