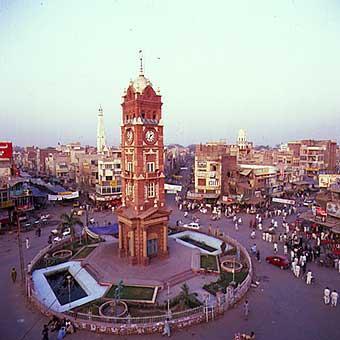 The reason Faisalabad is called Manchester of Pakistan because it’s the biggest textile city of Pakistan and all the industries here related to textiles and same is Manchester in UK so these cities are also named as Twin cities.

After Lahore, Faisalabad is famous for its food. The most common snack item samosas of Faisalabad are considered the best in Pakistan. Desi foods and snacks like dahi bhally, gol gappy are the specialities . Biryani and pulao are also very well-known. Moreover no city can boast of a better Dal Chawal serving than Faisalabad. It’s one of the favorite foods here. The parathas available at Ghanta Ghar are very famous and a large crowd comes to attend all night long. They come in different fillings such as potatoes, mixed vegetable, chicken etc. As far as drinks are concerned Rabri, Sugar cane rusk, limo pani and lassi are the most favorite drink of the people of Faisalabad. Lassi is being liked by most Punjabis.

Like all other cities, cricket is the most popular sport in the Faisalabad. The oldest and only venue for international cricket matches is Iqbal Stadium is situated here.

Other popular sports in the city are hockey, weightlifting, association football, kabaddi, table tennis, billiards and snooker, squash, and horse racing. Sports like badminton, volleyball and basketball have also started to gain popularity as western influences have affected the locals. The city also has facilities for hockey such as the Faisalabad Hockey Stadium on Susan Road which mostly hosts field hockey matches. Faisalabad, with its affluent culture and cheerful manifestations welcomes all to visit the Manchester of Pakistan and praise the beauty that resides in it as well as its people.

The Punjabi dresses are considered as the traditional clothes of Faisalabad. Punjabi dress for men comprises Pagri, Kurta and dhoti. Punjabi women wear Shalwar Kameez and Dupatta. Traditional Lacha and Bangles and Paranda are also used. Moreover all of these Punjabi women dress items can be embroidered to add more to grace and beauty of clothing. But with the passage of time Faisalabad women has started to adapt new styles, some of which are the combination of Pakistani and western clothing. Like women wear embroidered kurta with jeans and trousers. Faisalabad is well recognized for its cloth and related items throughout the world. It is the best market to buy home furnishings (bed sheets, curtains, towels etc.), personal clothing, and hosiery wear

There are lots of recreational places found all around Faisalabad which are a source of attraction for visitors and native people. The Faisalabad clock tower is famous over the world and is one of the oldest monuments still standing in its original form since British rule. It was constructed in a special way by placing the clock at the center of the eight markets which, from the top it looks like the Union Jack flag of the United Kingdom. Other recreational spots includes Happy Land Water Park which is an international level park built as a complete entertainment center for families and contains biggest water slides in Pakistan. It is also equipped with amazing swings for both children and adults. Rex City is a big computer market where once can find computer sales and service shop easily. Jinnah Garden is also a beautiful park in the city commonly known as “Company Bagh”. Canal Park located at the west bank of Rakh Branch Canal is also a good outing place for families. The majestic Chenab Club standing in the shades of trees and complemented by vast lush green lawns, is located in the beautiful surroundings of “Jinnah Garden” is great attraction.

Faisalabad has always been a hub of literature. Renowned poets and prose writers belong to this city. Sahir Ludhianwi, the great poet of the sub-continent, belongs to Faisalabad. The other important writers are Afzal Ahsan Randhawa, Shehzada Hassan, Adeem Hashmi, Riaz Majeed and Dr. Waheed Ahmed.