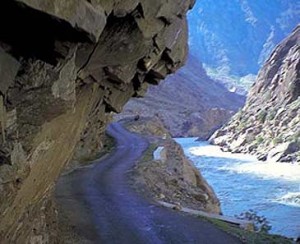 Turbat is a city located in southern Baluchistan lying in the Makran region. Makran region is predominantly mountainous with three parallel ranges running coast-west. The southernmost is the Makran coastal range, a line of low hills rising no more than 65 meters. Next is the Central Makran range, which reaches heights over 1300 metres. And to the north of this is the Siahan Range which separates Makran from Kharan. The coastal belt is a mixture of sand and stony desert with occasional oases supporting the small fishing villages. Between the Coastal and the Central Range lies the narrow, fertile Kech Valley, famous as the growing area of Makran’s 300 varieties of dates. All the rivers in Makran are seasonal. The Kech River with its tributaries the GIsh and Kil, steadily widens as it flows west though the Kech Valley, reaching over two kilometres in width at Turbat.

Turbat is the Divisional Headquarters for the Makran and has grown considerably in recent years to become an important data processing centre. However, the development of industry and enterprise is restricted by the absence of surfaced road linking it with the rest of the country. The town, of little interest in itself, consists of a dusty bazar and main street, with most of the new development spread out over a wide area to the south.

Miri Kalat, situated around 10 kilometers west of Turbat, on the north bank of the Kech River, is an important historical site with the ruins of a large fort perched on top a high mound. Excavations have revealed evidence of continuous occupation from at least the Harappan Period (2700 BC) until around 100 years ago. Little remains of the fort’s walls and towers, although it is likely that the high mound on which the fort is situated conceals older walls, perhaps up to 10 meters high. Buildings and artifacts are chronicling over 4500 years of habitation. An Italian team has been involved in excavating the site in recent years, although until there is a comprehensive plan for the conservation and the management of the site, it is unlikely to be fully excavated.

Punnu, Hoth prince and the hero of the romance of Sassi Punnu, belonged to Turbat. The remains of Punnu’s fort, surrounded by date trees on a high ground visible from far distance, can still be seen at Turbat. It is considered as one of the main historical counts of Turbat.

Although frequently referred to as Makranis, the people of Turbat are essentially Baluch. While they are divided into distinct groups and differentiated according to social status, the absence of a tribal system based on organised political or ethnic units is unique in Baluchistan. The dominant classes, traditionally wealthy land-owners include the Gichkis and Nosherwanis, or Mirwaris and bisanjaus. The middle classes of smaller land owners consist of a large number of family groups, the more important of which are the rinds, rais, hots, kalmatis, kauhdais, shehzada and jagdals or jats (meaning cultivators). The lower class consists of occupational groups and is considered to be the aboriginals of Makran. The meds are fishermen and appear to have much in common with the ‘Ichthyophagoi’ (Fish-eaters) described by Arrian. Interestingly, their patron saint is Sakhi Tangav, whose tomb is at Dadhar, on the Kachi plains near Sibbi, suggesting that they origininated from that area. The meds remain amongst the poorest groups in Makran. For 3 months of the year, from May to July, the seas are very rough and the fishing poor, forcing many to take loans from businessmen. Loans are then repaid in fish; prices being dictated by the money-lender, with the result that the fishermen are caught in a cycle of debt which renders them in effect bonded laborers. The Koras, who are sailors, are a branch of the Med. The darzadas are agriciultural laborers and although found scattered all over the Makran, they are concentrated around the Kech Valley and Panj Gur where they are known as Nakibs. The Loris are traditionally artisans (blacksmiths, carpenters, goldsmiths, etc) or else musicians and story tellers. Many of them are nomadic. Women occupy a unique position in Makrani society, which prevails in Turbat, as compared with the rest of Baluchistan. A marriage, as elsewhere, a bride price is paid by the bride-groom and his family. However, instead of cash payment to the bride’s father, this traditionally consists of land, ornaments and servile and dependents, all of which become the personal property of the bride. Women are also entitled to inherit portion of their parent’s property. Thus women are often the wealthy partner in the marriage, with the men being in-effect dependent on his wife’s wealth. The relatively strong status of women is reflected also in the tradition of attributing the qualities of a child to the mother.

A sect Zikri, are still to be found in the Makran region, particularly around Turbat, where they have established a position of strength in the business community. The Zikri sect is associated to the Mahdevi Movement which was started in the 15th century by Sayid Mohammad Joneri, who proclaimed himself a Mahdi (rightly guided one). One of his followers Mullah Mohammad is thought to have brought the faith to Makran, perhaps arriving with the Buledais tribe from Helmand. Although they consider themselves to be Muslims but they are frowned upon by orthodox Islam. There have been attempts by various parties in Baluchistan to have them declared as non-muslims and be classified as a religious minority. The all important hajj to Mecca is replaced by an annual pilgrimage to Koh-e-Murad (hill of fulfillment) near Turbat, where some believe the Mahdi is buried. Local animistic and elemental beliefs, which existed before the advent of Islam still exert a strong influence, particularly amongst the Meds. Most diseases are considered to be the result of a person being possessed by a spirit. Patients are first taken to the local Mat, somewhat akin to Shaman, who induces a trance in the patient and speaks through them to the spirit. Conditions are then agreed for the spirit to leave the patient, usually involving the holding of a Leb, or meeting, at which there is further chanting and induced trances until the spirit is appeased. Koh-e-Murad is a shrine and a sacred place for Zikris where they believe that Muhammad Jaunpuri, who they view as the Mahdi, deliberated and offered prayers for a long time. The followers of Zikri sect gather here at the night of 27th Ramadan for a ritual visit to this holy place. The Zikri kalima even differs from the other Muslims.

Being a small under developed place, the majority of residents in Turbat live in shelters or huts made of thatch as it allows free flow of air but prevents the convicts from dust and sun. Turbat has been otherwise a neglected area of Baluchistan since long due to scarcity of water and shortage of funds whereas it has been recognized as a headquarter of Baluchistan, Moreover now a days in Turbat the state of affairs aren’t stable rather getting worse because of Baluchistan being the focus centre for terrorism spotlight. Few years back, Mirani Dam in Kech area of Makran district with a catchments area of 12,000 square kilometres was built about 30 miles west of Turbat on Dasht River at a cost of Rs 6 billion, including Rs1.5 billion paid in compensation to the affected people. It will have a storage capacity of over 300,000 million acre-feet of water. The project launched in 2002 was conceived in 1956. Turban has remained the centre where human rights were adversely violated.