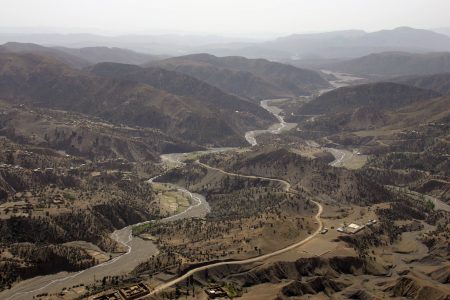 South Waziristan is a mountainous area of North-Western part of Pakistan. It borders with Afghanistan and covers an area of approximately 6,620 square kilometers. Waziristan is divided into two agencies for administrative purposes (South and North). It comprises the area west and south west of Peshawar between the Touchi River to the north and the Gomal River to the south. South Waziristan is the largest agency of FATA. The Agency is divided into three administrative sub divisions: Sarwakai, Ladha and lower form of Wana. Although there are five tribes in the region, but the most prominent are two tribes namely the Mehsud and the Ahmadzai Wazir (or in short Wazir). Another famous tribe is the Burki tribe, but they are very few in numbers in this region. These tribes are futher sub-branched into numerous small tribal clans, but most of them share common or at-least similar characteristics.

From a historical perspective, the people of this region have been very brave. The great fighter Alexander the great, was also not able to succeed and conquer this region. Even the Britishers were not able to take over the area. The British rulers named this area as “Hell’s door knocker”, because of its frightening character of local fighters and hostile territory. An interesting fact about this region is that no has ever directly governed this area. According to history both the Wazir and Mehsud tribes lived an independent life and were never governed by any government or king.

There are different Jirgas which operate in various regions of South Waziristan. The members of these Jirgas are local tribesmen. Any conflict in the community and all kinds of juridical decisions are taken by the Jirga members.

South Waziristan has a distinctive culture and some aspects of its culture are described below.

Education wise the area of South Waziristan is very much neglected. Although there are some schools in the area, but colleges are insignificant. The only main college in the whole region is Cadet College Wana. Another cadet college is announced to be open in Spinkai, but at the moment cadet college Wana is the only main college. Most of the students have to go to Dera Ismail Khan for further education. People of the region also don’t prefer getting much education. It is evident from the fact that according to an estimate the ratio of education is just 3% for females and 17% for males. Women education is almost insignificant. The local people don’t prefer that their women should get education due to prevailing socio-cultural factors.

People of Waziristan prefer to wear simple clothes which complement their climatic conditions. Men usually wear shalwar kameez, mostly white, grey and blue. The shalwar are baggy and big. They wear jacket or take chaadar. Common people wear a chitrali cap, but the influential ones or people of Jirga (council men) don’t wear this chitrali cap. Instead they wear a turban which is usually white or off-white in color. A few also wear a blue turban; they are considered the most influential ones. Kalashnikov is also carried by almost every man and is considered as a part of dress. The most common forms of Kalashnikov available in agency are Russian and Chinese. But people prefer Russian as they don’t get heat-up easily.

Women just wear shalwar kameez when they are at home. But when they are outside they wear a local dress called “Gaandkhat”. It is a long frock type dress made up of 30 metre of cloth called “baandina”. Gaandkhat is made in an umbrella style at the bottom, while it has design on front and back. To make it more attractive mirror work is also done on the front. The cloth for Gaandkhat i.e. Baandina comes from Karachi or dubai, but the stitching, designing and finishing is done by the household themselves. Women take chaadar above this Gaandkhat while going out of the home’s premises. But if the travel is to be done in far flung areas then chaadar is not taken, instead they wear burka over gaandkhat.

The most common sport of South Waziristan is the same, which is played the most throughout Pakistan i.e. cricket. Almost every boy of the region is seen carrying a bat on his shoulders. But football and volleyball are also played in the region. The local game of South Waziristan is known as “Baadaie”. In this game dried knee bones of goats are used. It is a little complicated game and only the locals are able to understand and play it.

There are not many local festivals of South Waziristan. Most of the festivals are religious which include 2 Eids. There used to be a festival named as “Mela Aspan”; a festival of horses. But this festival does not take place much now days.

Weddings are celebrated either very simply or with full pomp. But it does not continue for many days, rather there is only a one day of celebration mostly. Air firing is done on weddings and special dishes are cooked. Mostly mutton biryani, laarmeena and barbecue are seen in weddings. The expense of wedding is mostly shared by the bride and grooms family. There is also a trend in Mehsud tribe, that the groom’s family gives Rs. 70,000 to the bride’s family before the marriage, so that bride’s family can buy things and dowry for the bride. This amount is a fix amount and 90% of the times this amount of exact Rs 70,000 is paid.

Music is very much liked by the common people of South Waziristan. People listen to songs in waziri Pashto and perform a dance named “Aataan” on songs. Aataan is done on weddings as well. A musical instrument named “Sareenda” is also played by the people of this region.

South Waziristan is not only filled will culture but it is also rich in mineral resources like chromite and coal. Most of the area is covered with beautiful mountainous region. There are beautiful rivers and streams flowing in these mountains. But unfortunately at the moment this piece of land is facing a tough time. As army operation is being taking place and the people of region have been displaced in different parts of country. The current local population of agency is insignificant at the moment because of the ongoing operation. It is hoped that the current difficult time for the region and its people will soon be over and the people will go back to their homeland. The culture of South Waziristan will revive soon.