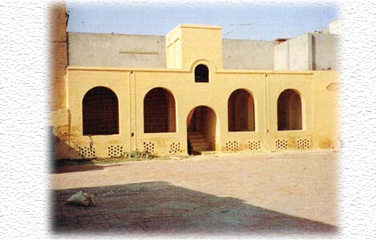 In 1935, Shaheed Ganj Movement was launched in the Punjab. It generated a great enthusiasm among the Punjabi Muslims in particular, and all the Muslims of the subcontinent in general. Before going into details of the movement, it seems pertinent to briefly deal with the history of the issue of Shaheed Ganj Mosque, which was the focal point of the dispute. There was an old mosque in Lahore on the way to the Delhi gate from Lahore Railway Station near the Polytechnic Institute known as Shaheed Ganj The mosque was built by Abdullah Khan, a cook of Dara Shikoh, elder son of Shah Jehan, the Mughals Emperor in 1753 A.D., who rose up to the position of Kotwal (city magistrate) of Lahore for his services.

Near the mosque, there was a place where criminals where given punishments during the tenure of Nawab Moeen-ul-Mulk, a Mughal governor of the Punjab in the 18th century. In those days, Taro Singh, a Sikh Saint, was slain there. After that incident, Sikhs named that place as ‘Shaheed Ganj’ ‘and built a Gurdwara (Sikh temple) on that place. Finally, they also occupied the adjoining mosque during the Sikh occupation of Lahore. According to another version, Sikhs used to call their Gurdwara ‘Shaheed Ganj’ as Muslims, following the footsteps of the Sikhs named the mosque as ‘Shaheed Ganj Mosque’ instead of naming it as ‘Abdullah Khan Mosque’.

After taking over charge of the Shaheed Ganj mosque and Gurdwara in March 1935, the local SGPC of Lahore decided to demolish the mosque ‘to uplift the condition of Gurdwara’. The mosque was finally demolished on the midnight of July 8 and 9, 1935. Consequently, Masjid Shaheed Ganj Movement was launched by the Muslims in which Syed Jamaat Ali Shah played a leading role.

To chalk out the future programme, a private meeting of the Advisory Committee of MajIis-i-Ittihad-i-Millat was held in the Barkat Ali Muhammadan Hall on the evening of November 10, under the president ship of Jamaat Ali Shah. The question of inauguration of a civil disobedience campaign was discussed but taking a final decision on the future program of action was postponed until January 9.

It amply shows t hat Syed Jamaat Ali preferred constitutional and legal course of action to agitational politics. To him, the lives of the Muslims were precious, and at no cost he wanted their blood to spill in vain. Therefore, he avoided to make any overt and direct confrontation with the authorities, and insisted on making a positive engagement with the government for solving the issue of Shaheed Ganj Mosque and other related questions.

Jamaat Ali Shah arranged an All-India Ittihad-i-Millat Conference at Amritsar from January 17-19, 1936. Its purpose was to secure the restoration of Shaheed Ganj Mosque and the tomb of Kaku Shah. The Conference was attended by 100 delegates from various districts of the Punjab, the NWFP and the United Provinces and presided over by Jamaat Ali Shah.

Nevertheless, the Masjid Shaheed Ganj Movement failed to achieve its aims. David Gilmartin has alleged that Jamaat Ali Shah’s leadership proved to be a failure for the Shaheed Ganj Movement. In fact, this was not the case. Both extrogenous and endogenous factors were responsible for the failure of the Movement. As for the extrogenous causes, the British Government of Punjab remained adamant in its stance not to resolve the issue at any condition because Government could not afford, after Kashmir Agitation (1931), another country-wide movement. So to weaken the Shaheed Ganj Movement, the Government forfeited the securities of the Muslim newspapers such as Ahsan, Zarnindar and Siyast. Moreover, the Government restricted Muslims not to carry swords in six districts of the Punjab by imposing the sections 13 and 15 of the Arms Act, while in these six districts Sikhs were exempted from any restriction of carrying Kirpans (daggers) and swords. Sikhs who were direct party to Shaheed Ganj dispute “made all negotiations impossible by, in fact, refusing to negotiate” with the Muslims or the Government.

Internally, the Shaheed Ganj Mosque Movement too suffered from organizational problems and internal schisms. After the departure of Syed Jamaat Ali Shah to Makkah, the leadership of the movement came into the hands of the extremist faction. The extremists wanted to have confrontation with the government, but their efforts could bear no fruit. Syed Jamaat Ali Shah’s departure proved a setback for the movement, as the leadership gap or vacuum which was created, could not be adequately filled by those who succeeded him as leaders of the movement. In addition, another important factor which contributed to the failure of the movement was non-cooperation from the Ahrars, who came into prominence in 1931 in connection with the agitation of the Kashmiri Muslims against the Hindu ruler of the State. Though Syed Jamaat Ali Shah supported Ahrar in their struggle but Ahrar did not cooperate in the Shaheed Ganj Movement. They kept themselves aloof from it by saying that it was a conspiracy against them. The Ahrar who considered themselves the champions of the rights of the Muslims and interests ‘became silent spectators while whole Lahore was burning over the issue of Shaheed Ganj’.

Syed Jamaat Ali Shah despite his old age and deteriorating health, worked for the success of the Movement. On the contrary, leaders and parties which considered themselves as the representatives of the Muslims i.e. Ahrar, Khaksar, Unionist, Jamiat-i-Ulema-i-Hind and nationalist ulema like Abul Kalam Azad kept themselves aloof from one of the most burning issues of the Muslims of India in 1930s, and did nothing substantial for the solution of the Shaheed Ganj Dispute. On the other hand, the Hindus, the Congressite nationalist leaders, who were not direct party to the dispute, were in full support of Sikhs by condemning Jamaat ALI Shah and Shaheed Ganj Movement.