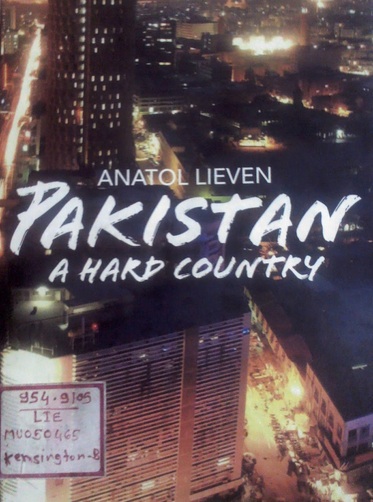 In post 9/11 era, Pakistan has been portraying by the mainstream scholars as a hazardous place on the face of the earth on the basis of its deteriorating security situation, declining economic condition and social unrest in the form of street protests and strikes. The prevailing transnational threat of terrorism in the presence of nuclear weapons has associated the probabilities of nuclear terrorism to Pakistan. Henceforth, the terrorism has become a gravest threat to Pakistan’s national security. It also provided sufficient chances to its traditional rivals to consciously criticize the state’s core values. Under the US led-war on terror, Pakistan has become an essential ingredient of US politics of South Asia. The Antol Lieven’s magisterial examination, after examining the Pakistan’s present position along with the evolution of history, foresee of future of Pakistan and its standing in the world politics.

The well-articulated research work of a London based scholar Lieven under the title of Pakistan: A Hard Country is a remarkable contribution in the ongoing debate on Pakistan and its allegedly continuous standing in world politics. Lieven, a former journalist of The Times, is presently a Professor of International Relations and Terrorism Studies at King’s College London. The analytical approach of the writer in this book describes the analysis of Pakistan’s internal and external problems. The central theme of the books is constructed on the view that the state is “divided, disorganized, economically backward, corrupt, violent, unjust, often savagely oppressive towards the poor and women, and home to extremely dangerous forms of extremism and terrorism.” (p. 4).

The book represents 20year analysis of Lieven’s research on Pakistan’s status in the contemporary world. The debate begins with the significance of nontraditional security threat to Pakistan. The four portions of Lieven’s work cover four different dimensions of state. The first portion deals with the historical foundations of the state along with its cultural, demographical and geographical characteristics. The second part of the book emphasizes the internal structure of the state which is generally based on justice, religion, military and politics. After evaluating the internal arrangements of the state, Lieven elucidates the provincial balance of the country. Finally, the discussion ends with the calculation of Taleban’s role in the politics and an assessment of state’s defeating Taleban strategies. In short, the twelve chapters of this book grounded on aforementioned outlines are well researched and insightful, because in his work, Lieven heavily relies on empirical sources by conducting interviews of diverse personalities which include: politicians, intellectuals, soldiers, intelligence officers, bureaucrats, villagers, religious personalities and general public.

The convincing argument of Lieven emphasizes the ecological disaster as a result of climate change and their regular occurrences are the potential threats to states existence and to its organized society (p. 3). In order to highlight the effects of global warming on Pakistan, the writer focuses the “floods of 2010 which brought about a major transformation of state’s system, by damaging local agricultural and infrastructure.” (p. 205).

Pakistan was not responsible for the creation of Taleban in Afghanistan

The critical examination of Pakistan’s nuclear capabilities by international community in the US-led war on terror has mounted on Pakistan specific security concerns by truing blind eye on India’s nuclear program which not only sparked an arms race in the region but also forced Pakistan to detonate its nuclear devices. The US deliberate ignorance of Pakistan’s role and its significance in the war on terror while signing of a civil nuclear deal, which escalated a new debate in the region, has underestimated Pakistan’s efforts in fighting against terrorism. Even the Pak-US alliance in war on terror has shifted Pakistan in serious political, economic and social crises. Contrary to a widespread belief, “Pakistan was not responsible for the creation of Taleban in Afghanistan,” the mainstream Madrasahs of Afghanistan started and promoted the Talebanization initially (p. 406).

This is surprisingly one of the contemporary scholarly books on Pakistan, which reveals an account of entirely unfamiliar arguments. The book ignores the rationality based on false perception, incorrect evidence and flawed assumptions in the argument that Pakistan is a failing state. The work of Lieven states, Pakistan is a hard country in a struggling phase. It is a deeply troubled state which is facing presently the threats of ecological change. The greatest threat of insurgency to the state’s existence is difficult to accept as a potential threat to Pakistan.

Furthermore, the writer is of the view that, at regional level, the cooperation between Washington and Beijing can safeguard Pakistan’s survival. Both the US and China should avoid the struggle to control Pakistan. Concerning the US engagement in Afghanistan, Pakistan is a vital component of US strategic calculation. Therefore, the inevitable role of Pakistan in US Afghan policy is a supporting rationale in shaping South Asian politics (p. 477). Along with US, the EU, like China as a South Asian key player, should also exert its influence in resolving the Afghan conflict while recognizing Pakistan’s legitimate goals.

The whole discussion of Lieven’s book is revolves around the collapsing survey of Pakistan. It also contains few accounts of shortsighted India’s role in the region. The US could play an effective role in minimizing the toxicity Indo-Pak relations. It is appropriate for the US to limit the India’s covert involvement in Afghanistan, which could be a viable option and prerequisite for the establishment of regional peace. Later on, the peaceful resolution of disputed territories could be helpful for the development of pleasant Indo-Pak bilateral relationship. In short, the writer tries to foresee the future of South Asia by providing sufficient options to overcome the present crisis.

Two decade of analysis based on extensive travel

The academic and journalistic attributes of Lieven represents the more than two decade of analysis based on extensive travel in order to access empirical knowledge. Therefore, balancing and convincing arguments evaluated the role of centrifugal and centripetal forces in Pakistan. It is hard to say the book introduces several new ideas while eliminating the existing prejudices regarding Pakistan’s values. Moreover, the book is a complete account of politics, history, sociology and anthropology, because it has diversity in its theme.