Movement for the Restoration of Democracy 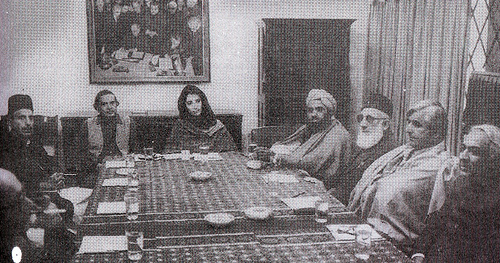 Movement for the Restoration of Democracy (1981-83)

M.R.D stands for the movement for the restoration of democracy. This alliance was created in 1981 to oppose Zia. It comprised nine parties; National Democratic Party,   Pakistan People’s Party (PPP), Majlis-e-Ahrar-e-Islam (MAI), Sindhi Awami Tahreek, (Pakhtoonkhwa), Awami National Party, Tehrik-e-Istiqlal, Pakistan Muslim League, Pakistan Mazdoor Kissan Party, Jamiat-e-Ulema-e-Islam, Qaumi Mahaz-e-Azadi; peoples party joined MRD because it could not wage a political struggle on its own. Some prominent leaders of M.R.D were Khan Abdul Wali Khan, Ms. Benazir Bhutto, Mr. Rasool Bux Palijo, Ms. Nusrat Bhutto, Mr. Fazil Rahu, and others. Its leaders abandoned its old revengeful politics and joined hands with the old opponents of Bhutto. The expectations of the leaders were not fulfilled by the Martial Law authorities, thus they formed MRD to restore Democracy.

Hereafter the M.R.D started their activities at a rapid pace. In 1983, it issued a critical statement about the government. It started a movement against the Zia regime. The M.R.D announced and appealed to the people to observe a black day on the eve of the sixth anniversary of the imposition of Martial Law, but this plan of the black day failed. It then launched a civil disobedience movement against the government on August 14, 1983, it was named as “Save Pakistan Movement.” On 14th August the MRD workers waved black banners at the tomb of Jinnah and uprooted the railway tracks in interior Sind. On August 18 another incident took place when the MRD workers attacked Dadu jail and enabled 102 prisoners to escape. Government properties were destroyed and armed confrontations with the law enforcing agencies generated an alarming situation. This movement lasted for almost three months but its effects were mainly felt in interior Sind. People from NWFP (KhaiberPakhtoonKhwa) and Baluchistan had less interest in this movement.  This movement failed to organize any country-wide strike although lawyers from Punjab supported it to some extent. It could not even win the favor of students and Laborers.

It failed because people could not believe in the illogical alliance of PPP and the opponents of Bhutto. On the other hand, the Zia government had won the support of a large number of people through the Afghan jihad and the slogans of Islamisation. Indira Gandhi’s support of the movement also made it suspicious in the eyes of the people. Moreover, the participation of jiay Sind and the criminals that escaped from the jails made the movement unpopular in the eyes of the people. Consequently, many leaders like SardarAabdul Qayum Khan distanced themselves from this movement and the remaining became inactive. Furthermore, the PPP used to turn a deaf ear to other parties in the movement have they had less influence in masses. For instance, it was decided that the parties in the movement would not take part in any elections under the Military, but when the local Bodies elections were announced PPP announced that it would take part in the elections without consulting partners in the M.R.D.