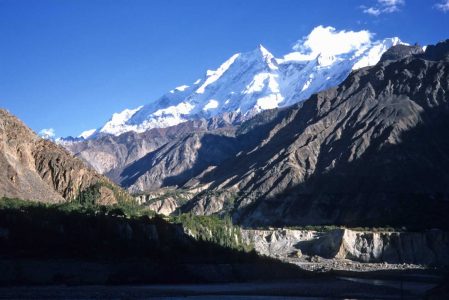 Gilgit city is situated in the north of Pakistan which is the capital of Gilgit- Baltistan. It is the hometown of beauty, various cultures and numerous languages. Gilgit region has been given many names like Jewel of Pakistan, Asia’s wonderland and Roof of the world, whereas it is considered to be the paradise when it comes to explaining the beauty of this region. Strategically speaking, Gilgit is one of the most important regions of Pakistan as it links Pakistan with China and is only 15 km away from Central Asia. However, despite the efforts of the local government of Gilgit- Baltistan to officially become a part of Pakistan as its 5th province, the Pakistani Government has put in little or no efforts to declare this region Pakistan’s official Province.

Gilgit has majority of Shia population with Sunnis, Ismailis and Aghakhanis and foreign hands take advantage of this sectarian divide and every now and then issues arises between these sects which disrupts the peace in the city. Besides so many law and order situations, Gilgit still stands at the top in the most beautiful places of the world which does not only have beauty on surface level but is rich in minerals as well. If we explore the culture of Gilgit, we realize that it is home to many ethnic groups. Exploring the culture of Gilgit brings out a mix plate of culture and traditions. Five different languages are spoken in the region, which includes Balti, Khowar, Brushaski and Wakhi. However, Shina is the basic language that is commonly spoken in the entire Gilgit-Baltistan region.

Moving down the memory lane Gilgit has had a very critical position geographically and has remained the hot plate for political and military rivalries between Russian, British and Chinese rulers. It was also the main region on Silk Road when the teachings of Buddha arrived in region from South Asia, but for now Shias, Sunni, Agha Khanis and Ismailis are in the region. The exact location of Gilgit is just a little off from the Karokoram Highway. It can be reached by air as well as by road. But the road tour is not considered to be safe these days due to high threats of terrorism.

Pakistan International Airlines offers a safari over the Gilgit city due to its beauty and tourists can view the whole city few minutes before the plane lands. The area of Gilgit is so beautiful that many folk tales have referred to Gilgit as Lhayul which means the land for Gods as well as the super natural things.

Gilgit is a valley town in the region of Gilgit-Baltistan. It covers an area of 72496 sq. km. The population is estimated to be around 180,000 but it is decreasing due to terrorism in the north of Pakistan.  The literacy rate is about 48.7% which is the highest rate among other provinces of Pakistan, and this is only due to the work done by Ismailis in the education sector. The Ismailis and Agha Khanis have worked a lot on educational sector in the Gilgit region. The Agha Khan foundation is actively working in the north and especially in the Gilgit for educating the youth and especially women.

The few places to see in the Gilgit city include Gilgit Bridge. The Gilgit Bridge is just above the river of Gilgit and is the largest bridge on a river in the continent of Asia. As a lot of Buddhists used to live in Gilgit before Muslims arrived therefore Kargah Buddha is also another attraction for tourists.  About 30km away from Gilgit is the monument of Taj Mughal which was built in the times of Mughals, and it is a must visit place. Gilgit is the central point for many destinations as almost each and every place is located near Gilgit city, therefore any visitor going to Gilgit takes a tour of the area and many places which are few kilometers away from Gilgit are also considered to be a part of Gilgit City. This city also offers a great shopping experience especially for women as Gilgit has some really good wholesale cloth shops where most of the cloth is imported from China. Tourists can go for fishing in the river, trekking over the mountains, boating and camping.

Gilgit can be looked at as a mix of various cultures hence providing diverse experience to the tourists. Gilgit is also host of many festivals like Shandoor Mela, Navroz, Jashn-e-Baharan, Babusar Polo Festival and other cultural festivals. Harvest is another festival that is celebrated in Gilgit when crops are fully grown and ready for cutting. This way the locals thank Allah for having a good crop.

There are three types of music that have originated from Gilgit. One is Alghani which is a rhythm. Ajoil and Souse are other types that are played on weddings and especially when Bride and groom departs. Whereas some local dances which are usually performed by men are sword dance, old man dance and cow boy dance.

The people of Gilgit normally eat dry fruits because of the cold weather.  But mostly the cuisines eaten in Gilgit have more carbohydrates as well as fats because it helps in fighting cold. The famous cuisines of Gilgit include Marzan, Skampo-Sha, Sha-chu, Shabaly and etc, different types of soups are also made according to the weather.  Most of the Gilgit people use dairy products in the house. There is a very famous tea named looney cha made in Gilgit area. Kashmiri tea is also one of the favorites as being near to Kashmir the Kashmiri cuisine is quite frequently made in Gilgit households. Khulak is a special breakfast that is made by using barley and butter as core ingredients. However, most of the foods eaten in Gilgit include the use of barley.

Since Gilgit area is very good for the growth of fruits therefore it is at times referred to as the fruits heaven. Many fruits are grown in this region like apples, apricots, berries, pears, grapes etc. Fruits as well as vegetable juices are the most favorite of the local people. More and more vegetables are consumed by locals to stay fit as well as healthy.

There is also one interesting fact about the architecture in Gilgit. Even the architecture speaks of the culture of Gilgit.  The houses are made near the river bank and have flat rooftops. Most of them are painted white with boundary of maroon color. Bricks as well as wooden slabs are used for the boundary and such houses are called Thather. They are considered to be very strong as this is the demands of the climate of Gilgit City. Swastika is also used for carving on the wooden planks and this design is considered to bring luck for the people.  The buildings are not very tall and as it is a valley therefore many houses are made of wood. Even though new constructions in Gilgit are made by using modern designs but it is not a good very good idea since it does not prevent from extreme weather.

Interestingly the economy of Gilgit depends heavily on tourism, and exports of fresh and dry fruit as well as the trade route between Pakistan and China. A lot of good Silk is available in the area at extremely inexpensive rates. Even though the government of Pakistan has ignored this region for a long time, the trade with China has provided a lot of help to the people of Gilgit. Most of the people here are engaged in professions like tourism and agriculture for earning a living. They grow their own vegetables and use home dairy products.  Main agricultural products of Gilgit include corn, fruits, barley and wheat.  People of Gilgit are not very fond of eating spicy food and it is because the weather demands they eat food that keeps them warm.

The lifestyle of the people of Gilgit is very simple. The public is very welcoming and you will see many foreigners in the area. It is very easy to get help in Gilgit as the people are willing to guide. Even though the region was neglected for a long time, the trade ties with China have done a lot of good to the people of Gilgit. They are not only doing business successfully but have improved the overall area as well. The people of Gilgit are not only nice but also very beautiful with friendly attitude. Gilgit is no doubt the best place to visit during holidays. One can truly admire nature and enjoy the beautiful surrounding areas as well. The tourists can enjoy simple lifestyle of the people, beauty of mountains, amazing cuisines, lovely weather and the shopping. Sports are also another way of spending time in Gilgit.

Gilgit is not only in the north but also a beautiful place for tourists. Many visit it every year and enjoy good food, fun sports and inexpensive accommodation. The people are very honest and loving. Most of the tourists visit it because of its beauty and historical significance. Shopping is extremely affordable as compared to other areas of Pakistan. The markets are easy to reach as local transport is available. One fun fact about Gilgit is that the shop keepers at times also accept the foreign currency so it is not necessary for tourists to carry Pakistani currency with them all the time. Gilgit is no doubt a heaven on this earth. Such spectacular beauty is hard to find in any part of this world.