Asif Ali Zardari was born on July 26, 1955. He belongs to a Baloch tribe, set live in settled in Sindh. He is the only son of his father, Hakim Ali Zardari, who was the tribal chief of his clan. He received his early education from Karachi Grammar School. According to his official biography he graduated from Cadet College Petaro in 1972.

Asif Ali Zardari was married to Benazir Bhutto on 18 December 1987. It was an arranged marriage, celebrated according to Pakistani culture. 100,000 people attended their marriage and it enhanced Benazir’s political position in the country. The couple had three children, two daughters, Asifa and Bakhtawar, and one son Bilawal. 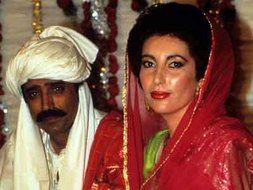 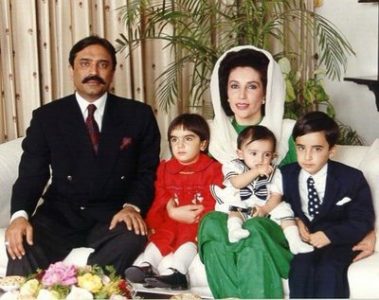 After the death of his wife Benazir, there was a rumor that Zardari had remarried a lady named Tanveer Zamani. However, later Zardari denied the rumor. 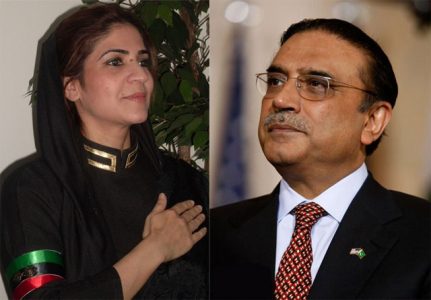 In May 2011 his father died. He refused to become the chief of his clan and decided to make his son Bilawal a tribal chief. During Benazir’s first term Zardari was not associated with the government but was allegedly involved in corruption cases. In 1990, Zardari and his wife were not allowed to stay in the country by the establishment. In April 1993, he became the Cabinet minister in the caretaker government. In March 1995, during the second regime of Benazir Bhutto, he became chairman of the new Environment Protection Council. He once again had to face a lot of corruption allegations. When Murtaza Bhutto was killed in September 1996, many, including Murtaza’s family, blamed Zardari. In November 1996 when Benazir’s government was dismissed he was arrested at Lahore. According to New York Times in January 1998 there was a detailed report about the corruption of Zardari. While under arrest, in March 1997, he was elected as a Senator and was brought to Islamabad under strict security to take an oath. For the entirety of his tenure, he remained under arrest (though he spent most of the time at PIMS, Islamabad).

According to New York Times in January 1998 there was a detailed report about the corruption of Zardari. He was ultimately released in 2005 and immediately decided to leave the country. He returned on the night of his wife’s assassination to attend her funeral. He did not allow the postmortem of Benazir’s body. He called for international inquiry of his wife’s assassination. According to the will of Benazir, Zardari was to succeed her as party leader. He made his son Bilawal a chairperson of the party and himself assumed the charge of the party in his absence, as Bilawal was studying at Oxford at that time. 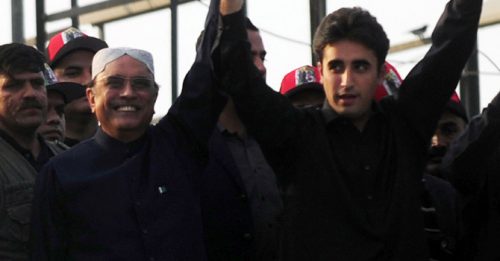 Despite the pressure of the joint opposition, Zardari not only decided to contest the elections of 2008 but also persuaded Nawaz Sharif to participate in the 8th Parliamentary elections. PPP emerged as the leading party with PML-N as the runners up. Nawaz Sharif and Zardari agreed to form a coalition government. In mid-March, Yousaf Raza Gillani was unanimously elected as the Prime Minister. Zardari promised Nawaz that his party would reinstate the sixty judges, previously sacked by Musharraf, latest by 30th April 2008. However, later on, Zardari backed out from his promise and the coalition failed. PML-N withdrew its support for the government in May and all the ministers of the party resigned.

When Musharraf was forced to resign, Zardari decided to contest the presidential elections against PML-N’s candidate Saeeduzzaman Siddique and PML-Q’s candidate Mushahid Hussain. Zardari won the majority of votes i.e. 481 out of 702, and thus became the 11th president of the country. He took oath in a ceremony held on 9 September 2008, in which Afghan President, Hamid Karzai was invited as a special guest. In his inaugural address to the joint session of the parliament on September 20, 2008, Zardari announced to make Pakistan, once again a true Parliamentary democracy by giving all the extra powers back to the parliament. 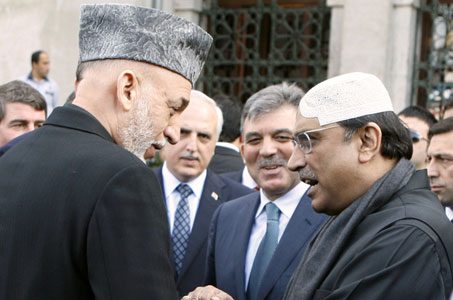 Immediately after that, he went to New York to attend the annual session of the UN General Assembly. While addressing both the Pakistani parliament as well as the UN General Assembly, Zardari put the photograph of Benazir Bhutto on the dais in front of him. He repeated this practice during all his addresses that he ever delivered during his tenure as the President of Pakistan. Probably he wanted to give the message that Benazir was the real power and he was only acting as her deputy in her absence. 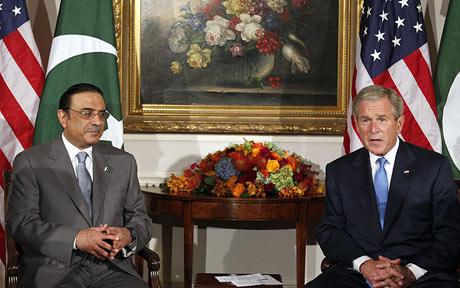 Reinstatement of the judiciary

Though Zardari promised to reinstate the judiciary, however, his Government took no practical step in this regard until and unless the masses and the civil society of the country forced him to do so. In March 2009 the lawyers, civil society, and opposition parties under the leadership of Nawaz Sharif started a long march from Lahore to Islamabad. The massive support for the march forced Zardari and his government to take a decision which they otherwise were not interested in taking. Prime Minister Gillani promised to reinstate Iftikhar Chaudhry as the Chief Justice of the Supreme Court by 21, March 2009. Fifty-Six other judges of the Supreme Court and different High Courts were also restored. After the restoration of the judiciary, Zardari and his team had to face a lot of problems. The independent judiciary was a big hurdle in the way of Zardari and the PPP government to do things freely. The biggest boon of contention between the judiciary and the executive was the NRO case and the issue of reopening the Swiss cases against Zardari.

Despite Zardari’s promise to do it at the earliest, it took him and his government more than two long years to undo the 17th Amendment in the Constitution of 1973. The critics believe that Zardari was not interested in giving all the powers back to the parliament and that was the reason that he decided to become President of the Country in a parliamentary system. On the contrary, his supporters believe that such decisions should not be taken in haste. The fact of the matter is that the 18th Amendment in the Constitution was passed by the parliament on April 18, 2010, and Parliamentary Democracy was once again restored in the country. However, despite the passage of the 18th Amendment, Zardari as the President of the country remained the power hub. No decision was taken by the PPP government before the prior approval of the Zardari. He failed to act as the non-partisan representative of the Federation and continued presiding the meetings of his party in the President’s House. It was once again due to the interference of the judiciary that he was stopped from using the Presidency for political activities during the last days of his tenure.

Both before and after the passage of the 18th Amendment, Zardari was at the forefront in running the foreign affairs of the country. He attended all the meetings with the other head of the government, which otherwise was the duty of the head of the government in Pakistan, i.e. the Prime Minister, to attend. It was he who tried to resume the peace talks with India, visited China, and tried to negotiate with Afghanistan and the United States. However, no breakthrough in this regard can be attributed to his credit. During Zardari’s tenure as the president of the country, the law and order situation deteriorated, bomb blasts were a routine, secretariat violence increased and street crimes in the big cities, especially Karachi reached their zenith. In spite of the passage of a joint resolution by the parliament against the drone attacks, the practice continued. During the elections of 2013, the people of Pakistan voted against Zardari’s policies and PPP touched its lowest on the popularity graph. However, Sind rural cast their vote in favor of Zardari’s policies, and the party managed to get more seats from the province than what they got in the previous elections. 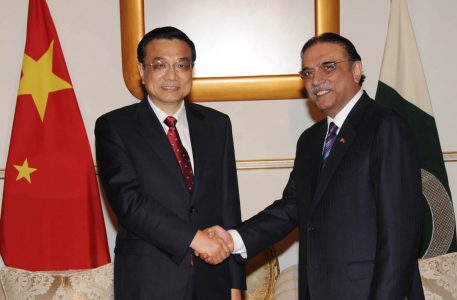 Zardari’s tenure as President came to an end on September 8, 2013. Before leaving the president’s house he made it clear that he would no more be interested in becoming President or Prime Minister in the future. He would reorganize the party and would help his son Bilawal to regain power. 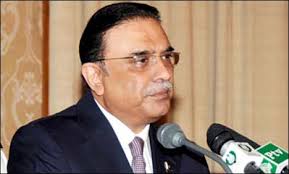