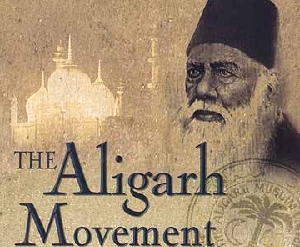 During the second half of the 19th century Muslim history of the Sub-continent, Aligarh Movement is very famous. It was primarily just an educational movement but its other contributions for the Muslims of India cannot be denied. It started with the efforts of Sir Syed Ahmed Khan who was not only its founder but its heart and soul. And the contributions of Aligarh Movement were closely linked with the activities of Sir Syed.

Sir Syed Ahmed Khan being the member of the British government in India was aware that the Muslims were termed the prime instigator of the War of Independence 1857. In that situation it would be unwise for the Muslims to play politics. He believed that only with the gaining of the modern western education could the Muslims of India survive the wrath of their English masters. Thus in order to help his fellow Muslims he tried to put their concentration on modern education and for that reason in 1875 at Aligarh he laid the foundations of Mohammadan Anglo-Oriental School that later became a college in 1877. But since the formation of a college was not enough for the Muslims of the whole of the Sub-continent, Sir Syed founded Mohammadan Educational Conference in 1886. Meetings of this conference were held in different cities but in these meetings different issues regarding Muslims were also discussed along with the educational ones.

At the start of its career the Aligarh Movement was inclined towards the British government because its intentions were to keep good relations between the Muslims and the White men for according to Sir Syed it was beneficial for the Muslims. For the same reason he appointed the English on significant positions. But with the passage of time this influence started to decrease. As a result of this movement and with the policy of Sir Syed a group of people appeared, educated at Aligarh, who seemed faithful to the English government in India and thus the English in return started adopting positive attitude towards the Indian Muslims and supported their efforts, educational in particular.

Being the protagonist Muslim school of modern education, Aligarh inspired many other institutions in India. The connection with the modern world and modern learning led to many benefits for the Muslims of India. The modern educated Muslims now had the eligibility to apply to all sorts of governmental jobs even ICS and being educated and well aware of their social and political rights now the Muslims started demanding for due share in employment along with other communities of India. The resulting inclusion in jobs led to their financial improvement and now the Muslim trading companies started emerging and developing along with their Hindu counterparts.

One of the major contributions of Aligarh Movement was the defense of Urdu language. Urdu emerged as a full fledged language during the rule of the Muslims in India and it had all the effects of Islam and Islamic history. Thus it was the representative of Muslims and Hindus tried to replace it with their own Hindi language. During the lifetime of Sir Syed and even after his death his successors from the Aligarh platform tried to counter the anti-Urdu aggression and they remained successful in keeping Urdu alive.

It is said that Aligarh Movement also promoted and spread the Two-Nation Theory. During the course of the Urdu-Hindi controversy, Sir Syed had realized that it would no longer be possible for the Muslims to keep themselves united with their Hindu Indians and thus he changed his policy and primarily focused on Muslim Indians. His successors followed this attitude. The credit goes to the formation of Simla Deputation in 1906 and the foundation of All India Muslim League later in the same year also rests with the Aligarh Movement. As we all know that the AIML was the cause of the formation of Pakistan and the division of India, we can say that Pakistan owes its freedom to Aligarh Movement. Similarly leading freedom fighters like Mohammad Ali Johar, Maulana Zafar Ali Khan and Maulana Shaukat Ali etc. were old students of Aligarh. The then students of Aligarh formed All Indian Muslim Students Federation to unite Muslims under the AIML’s flag. Aligarh also played the major role in organizing Pakistan conferences in India. The Ailgarh Old Boys Association spread the Muslim League message of independence in the provinces of North-West and Baluchistan. So the little high school founded in 1875 at Aligarh by Sir Syed Ahmed Khan became a full fledged movement and led to the formation of an independent state on the map of the world.